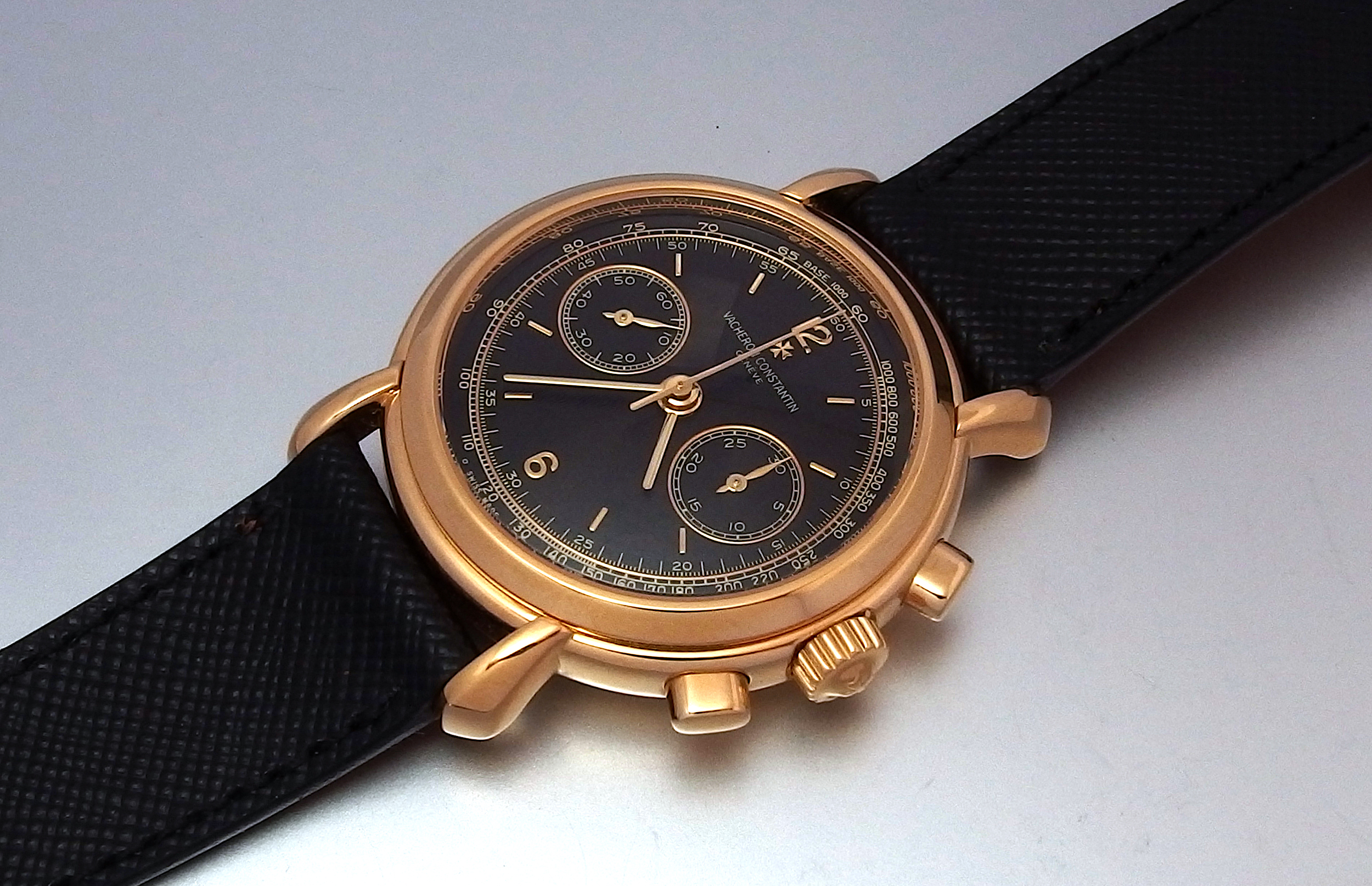 A few months ago, I met again with the T.W.O Crew and as usual those meetings are inspirational and often lead to hunting a new watch. Girard-Perregaux has a brought collection and you can almost find any modern complication within the last 30 years. However, finding a classic manual wind chronograph in the modern collection is not that straight-forward. There is the manual wind Chronograph 49529, but that is very close to my 49542 with automatic winding and the only other option I really like would be the almost unobtainable 90170 with manual wind Rattrapante chronograph movement.

So why not look outside and one caliber that is highly acclaimed are modern adaptations of the Lemania 2310. A Patek 5070 is a clear contender but above a price range I would currently hunt. On the other hand, the Vacheron Constantin Historiques Chronograph 47101 is relatively easy to find and not impossible to fund. So at our T.W.O crew meeting I paid close attention to my friends Historiques Cornes de Vache chronograph, on which I reported on here previously.

While the Cornes the Vache is a superb chronograph, it didn’t give the right feeling on the wrist that would put me straight on the path of getting one. While those cow horn lugs I really liked, the rest of the case was less spectacular, almost very straight like a Lange case. Once you have some hesitation especially in this price range, it is wise to look further. And when I started to study closer its pre-predecessor, the 47101/47111, I got hooked on that model. It was just much more fitting my style and my personality while not making any compromise in terms of quality, finishing or function.

The Historiques 47101 Chronograph is a modern interpretation of a classic vintage VC Chronograph from the 1940s/50s, the Ref 4178. The 47101/47111 was in production from 1990 to 2003, so for quite a considerable time and as such can be easily found in the second hand market. Even more surprising, these watches can almost be considered bargains, giving you the maximum bang for the buck. The most common version by far is the yellow gold with white dial. I’m not aware of a rose gold or even white gold 47101, but happy to be corrected. There is however a platinum case 47101/47111. Those are much rarer than the yellow gold and not that frequently for sale.

Platinum watches of the 47101 had either a white dial, a guilloche pattern black dial or a guilloche salmon dial. All of the platinum ones are fantastic but the salmon is probably the most special even I think the black is rarer. However, there is another version, maybe not as rare as the platinum but much less seen that the yellow gold/white dial.

So let’s take a closer look, starting with the dial. A classic symmetrical layout, bicompax with a 30min Chronograph counter and small seconds. Both subdials have lovely shaped leave hands, while the main hands are stick hands. The guilloche pattern is a fine checker box pattern with vertical lines, not sure how else to describe it. On the outer side, there is a tachymeter scale and a fine golden framing of the subdials and the tachy-scale. Above the brand name the iconic applied Maltese cross. Unlike the modern Cornes de Vaches, the 47101 uses Arabic applied numbers for 12 and 6.

The case I think is even more complex than the dial, there are almost different layers that add angles and curves, all highly polished and topped by a nicely domed sapphire crystal. And then there are the tear drop lugs. I adore those lugs. The cow horns are cool, but for me the tear drop just did it. With 37mm the watch is much smaller than the 42mm Patek 5070. Personally, that is a big plus for me. The movement is much better sized for the smaller case while I never have a feeling that the watch is too small. The case back is a simple snap-on on the 47101 while on the 47111 it was secured with 4 screws. Not sure there are any more differences between those two versions. I like the snap-on for its vintage appeal while for safety I would prefer the screws.

What is more important though is what is beneath the snap-on case-back. Vacheron Caliber 1141, already mentioned based on the Lemania 2310, slightly modified by VC. Patek went further with the modifications than VC, but both houses have done a superb job on the finishing. Geneva Seal for the VC and before Patek introduced its own seal, it also achieved the Geneva Seal standard. From that side they are pretty much on par. The VC comes with a classic swan-neck regulator and non-hacking seconds. What I particular like is the 18,000 vph or a mere 2.5 Hz. That makes the oscillation of the balance wheel nicely visible without the need of any slow-mo video.

Winding the movement through the crown is a real pleasure. Perfect resistance that gradually increases as you wind and sensible clicks please the ears. The pushers are crisp to operate, but not super-soft as say in a Lange. What really makes the movement special is the three-dimensional depth and the perfect finishing at all levels. When turning it in the light, it really comes alive.

I already mentioned that because of its moderate 37mm size, it’s a perfectly comfortable fit on the wrist. The tear-drop lugs give it extra presence. Another element that adds to the comfort is the VC buckle.

A half Maltese Cross with the pin so smoothly seated into the buckle it will never get stuck on a shirt or jumper. The strap size is 18mm at the lugs and 16mm at the buckle. I think the watch can be combined with a number of strap colours, I opted for a more formal black strap but less formal than a (shiny) alligator. To me the best combination thus far.

A wristshot to finish the introduction of my very first Vacheron Constantin, a brand I always admired and I have been close before pulling the trigger, but now I’m extremely happy that I ended up with this Historiques Chronograph.