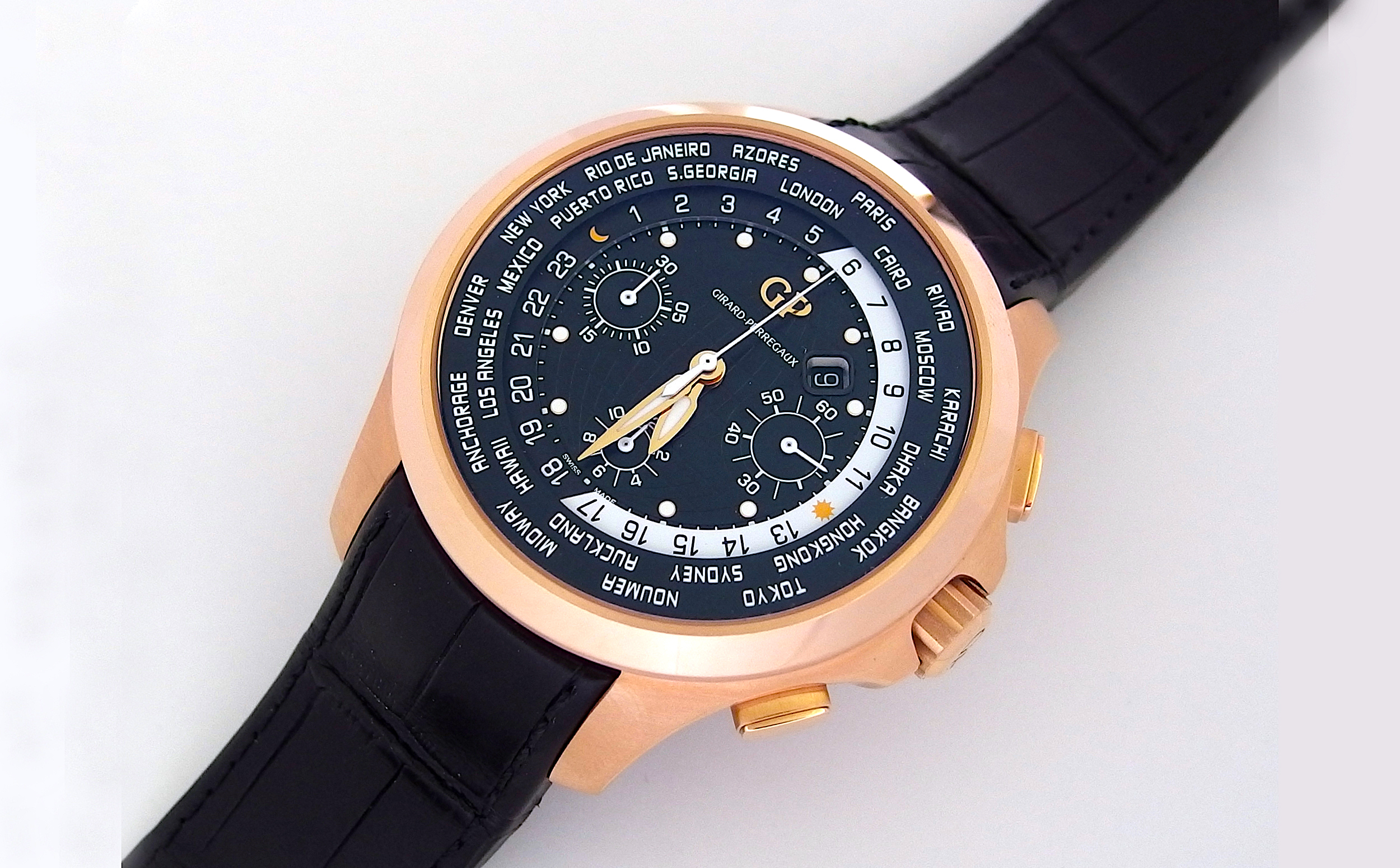 Time to have a closer look at one particular version of the Girard-Perregaux Traveller line from the mid 2010s. The Reference to take a closer look at is the Traveller ww.tc with pink gold case and black dial, 49700-52-632-BB6B. I’m a great fan of the classic ww.tc from Girard-Perregaux and at over time I had owned 4 different models. When the classic ww.tc was stopped, shortly after the Traveller line with a world timer was introduced. For some reason I never got so warm with it to take one in my collection, but let’s have a closer look.

I wanted to pick the one version I like the most of the Traveller’s ww.tc to see if that changes my mind. The combination of pink gold case and black dial ticks a lot of boxes for me. The warmth of gold with the dark dial is a great combination. Looking at the newly designed case of the Traveller it has grown by a mere 1mm to 44mm when compared with the classic ww.tc Chronograph. What may not sound like mich of a difference, there are number of factors that put the 44mm case just over the edge of “too big”. First the crown guards add to the visual size and the long even though very curved lugs put this watch in a different size category at least on my wrist compared to the 43mm ww.tc.

Positively, I think is the loss of the second crown at 9 which used to set the world cities ring. This is now all operated through a separate crown position of the crown at 3. In general, however, I would have wished for a pusher solution like you find on the Patek world timers. The mechanism cannot be so difficult to add as in the 1966 Dual time, GP just did that. Nevertheless, that is only a minor point for me. The concern remains on the grown size and overall much bigger appearance.

The black dial should counter that to some extent, but in reality it is now. Taking a closer look at the dial, I really like the longitude/latitude pattern symbolising a globe. The general layout is very much the same as for the classic ww.tc however with a few changes that are worth noting. The font used is much more modern and bold and while it may be a bit more legible, I confess, I much prefer the old font.

The subdials are also changed and now much more similar to the first iteration of the ww.tc, the Ref 49800. What I however find hard to tolerate is the that the subdials at 3 and 9 are partially covered by the 24 hour ring. This is the least visible on the all black dial but on the Pandas just looks bad. The classic ww.tc managed that in a much better way and all that with a smaller diameter. Lastly, the new hands of the Traveller I also find less elegant than the classic leaf hands. All in all, these little complaints add up to not liking the Traveller such that I would consider a purchase.

For some odd reason, I do like the Traveller GMT, Large Date and Moon Phase.

One word to the movement. Nothing changed over the classic ww.tc, Caliber 03300 remains at the heart of the watch. Visibly, the rotor has been replaced by an arrow-shaped one, even the gold watches have a steel rotor. Not a deal breaker for me, but also another step back in my view.