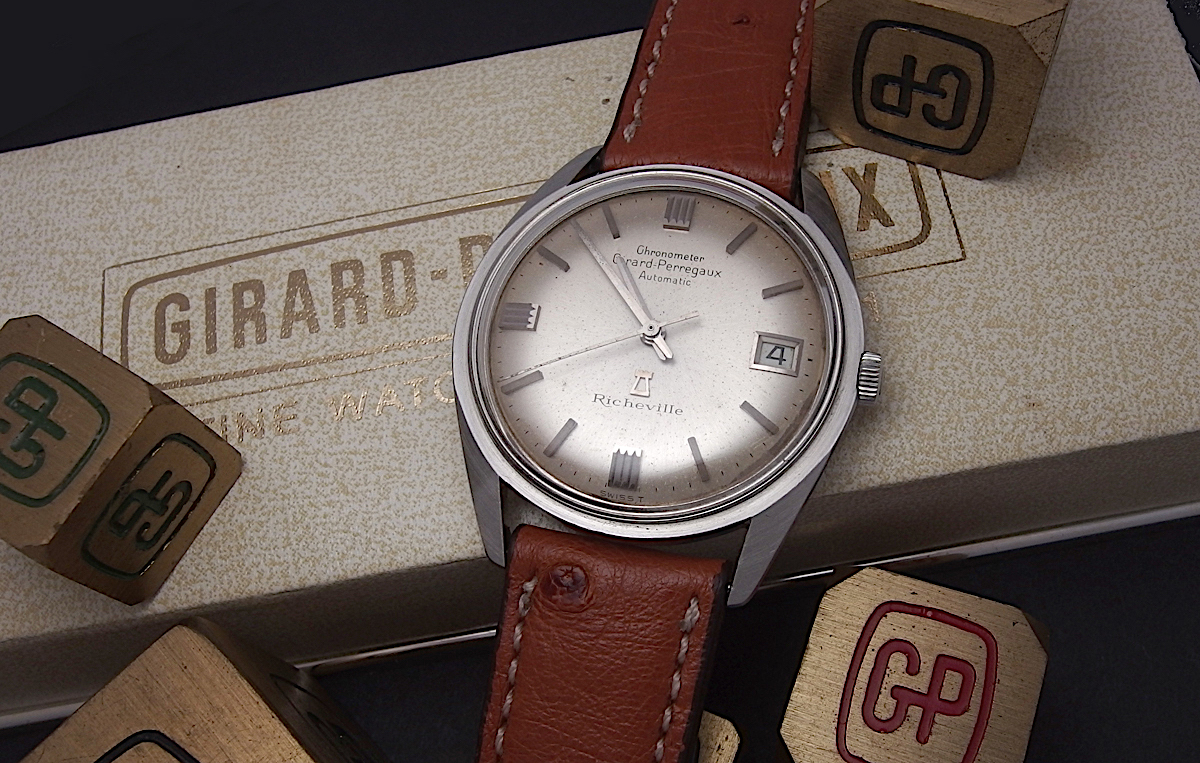 The modern Richeville collection is known to most collectors that have an interest in Girard-Perregaux. Starting in the early/mid 90s with Tonneau-shaped Chronographs as well as rectangular watches, it has been in the collection all the way through the 2010s. Today we no longer have a Richeville collection. What is often overlooked however, is the 1960s Richeville watches. It is time to give this model a worthy deeper look.

Unlike it’s modern successor, the vintage Richeville’s were neither rectangular nor tonneau-shaped. On the other hand, the vintage ones had a Tower logo on the dial, something not seen in the modern collection. The Richeville was introduced in 1964. All Richeville had identical cases, a semi C-Shape case pre-empting the case fashion of the late 1960s. A modest but not small 34mm case diameter and 18mm lug width makes this watch neither big nor small.

There were T.W.O different References of the Richeville available. Both shared the same case and dials. Ref. 8444 is without date while Ref. 8445 is with date. In general, there are not that many variations, but if you take all possible combinations, one could actually build up a sizeable collection with just the vintage Richeville.

There are a couple of aspects that make the Richeville very interesting. If you put it into the time-frame of the mid 60s, you have mostly the general Gyromatic line of automatic watches and some manual wind models like the Sea Hawk. The Richeville seems to provide a collection that positions itself above the standard Gyromatic with more refined dials. Another interesting fact, Richeville’s miss the “Gyromatic” on the dial and instead use the more commonly used “Automatic” even though the calibers used are Gyromatic calibers. The mid-sixties also saw the push for higher accuracy and Chronometer certification. A couple of years after the introduction of the Richeville, GP was very successful with its Chronometer HFs based on Caliber 32A.

The Richeville’s never received the HF movements, instead stayed with the non-HF Calibers 31 and 32. However, some Richeville’s were released with Chronometer certified movements as well and also with “Chronometer” on the dial. So you essentially have a Chronometer GP with Caliber 31 or 32 without the High-Frequency. That on its own makes them very interesting and collectable.

Going back to the different variants. Already mentioned, the with date (8445) and without date (8444) and the Chronometer and non-Chronometer versions existed. Cases were either steel, gold-plated or solid gold. Finally, there are T.W.O different dial versions as well. A pie-pan dial and a flat dial with broad indexes. To finish it up, while most dials had a silver sunburst, also a black dial (at least with the flat dial existed). So if you start to count all possible combinations you can easily see that this could be a sizeable collection.