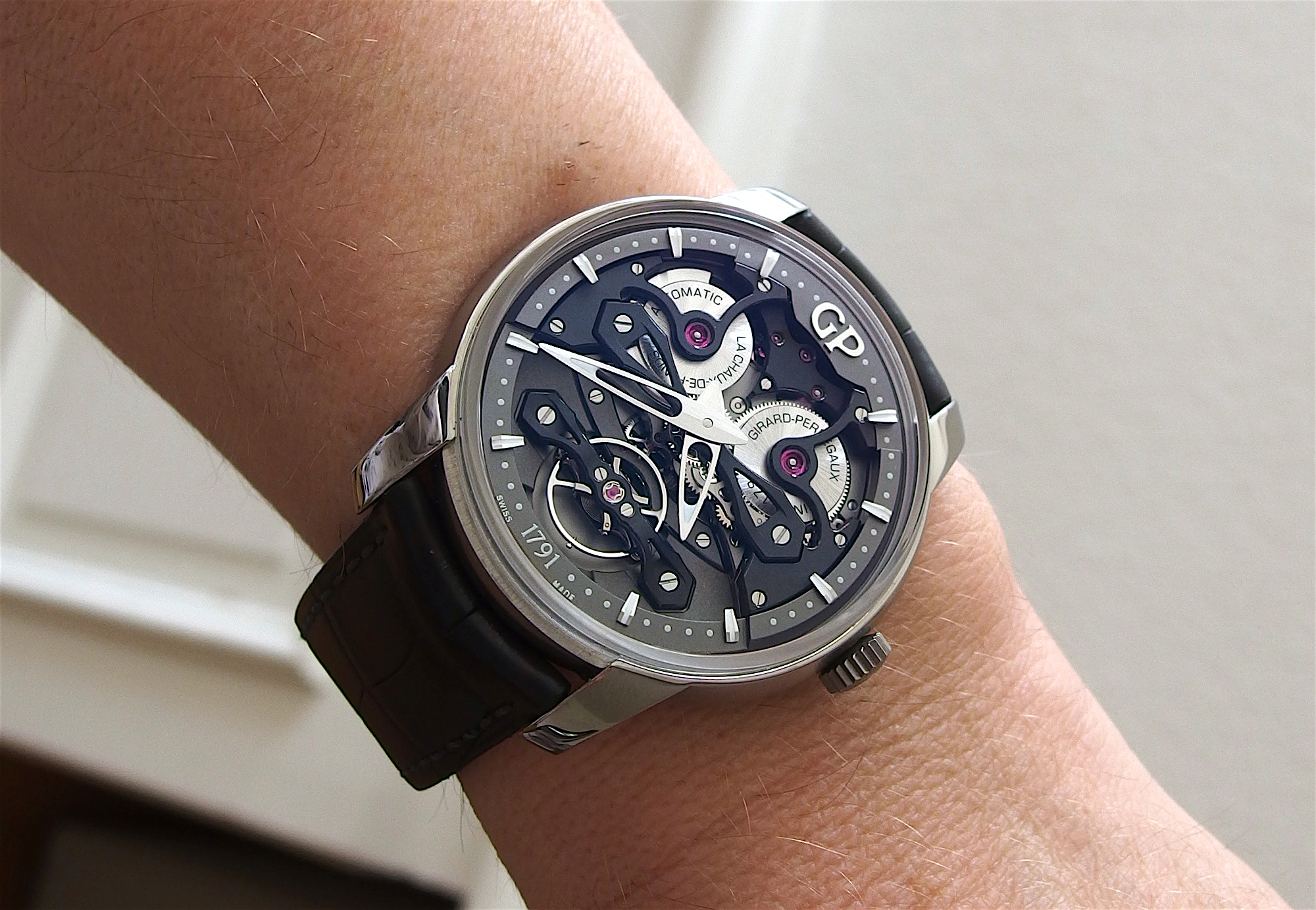 A quick re-blog of this hands/on review of the Girard-Perregaux Neo Bridges from a few months ago because tomorrow we will look closer at its cousin the Classic Bridges. Stay tuned.

At SIHH 2017, Girard-Perregaux surprised us with a fresh-looking new development bringing the Haute Horlogerie Bridges concept to a more affordable price range by dropping the Tourbillon function.

The Neo Bridges 84000 is a new and fresh way to create a skeleton watch. Unlike most Skeletons which are skeletonised standard calibers, the Caliber GP 08400 was designed from the start for exclusive use as a Skeleton watch.

The most striking visual element is the placement of the main barrel and the micro-rotor under the open bridges and with central ruby jewel. It will immediately associate the look with a skull, don’t you think?

In the lower part you will find the balance wheel under an arched bridge, similar to the bridge design we know from the Neo Tourbillon. Inspired by architectural concepts, these bridges look distinctively modern. The balance wheel is almost floating on top, something one likes or not. To my eye, it feels a bit odd to have the balance wheel as such a central exposed element when the tourbillon is missing.

The case is made from polished Titanium and is 45 mm in diameter. The watch is large but it’s perfectly fine with the character of the Neo Bridges. What I like is that the Titanium is not the usual grey, but almost appears like polished steel with the benefit of the lightness of that material.

Time is shown through two large hands that are beautifully skeletonised as well and feature some lume at the tip. Despite the busy movement underneath, I find reading the time on the Neo Bridges is easy with one glance. There are no seconds displayed but the balance wheel will always indicate that there is activity on the watch.

As already mentioned, when looking at the back or in general, one would expect a manual wind movement, where in fact it features an automatic winding mechanism through a micro-rotor, which is kept as a full circle at the front to balance the look with the main barrel next to it.

On the wrist, the look is really modern and attracting a lot of attention. The 45mm take its presence but with the short and curved lugs it can be worn on smaller wrists as well. The buckle is a new triple-folding mechanism that once closed is comfortable but takes a bit of fiddling to close it. The strap is a matt grey alligator, but I think the Neo Bridges would also look great on some other, more high-tech material.

In 2019, Girard-Perregaux introduced a “Earth-to-Sky” edition with a PVD-coated black Titanium case and some blue colour elements in the movements like the main barrel and the winding rotor. Overall, the watch is much darker, but I do prefer the original, especially for the polished Titanium rather than the PVD-coated case.

Could I see me wanting a Neo Bridges in my collection? It’s enticing on the one hand, on the other hand, I always feel I would want to go all the way and aim for a Neo-Tourbillon. Tough choice, but the Neo Bridges is for sure a great new development with a fresh and modern movement and with true skeleton genes.