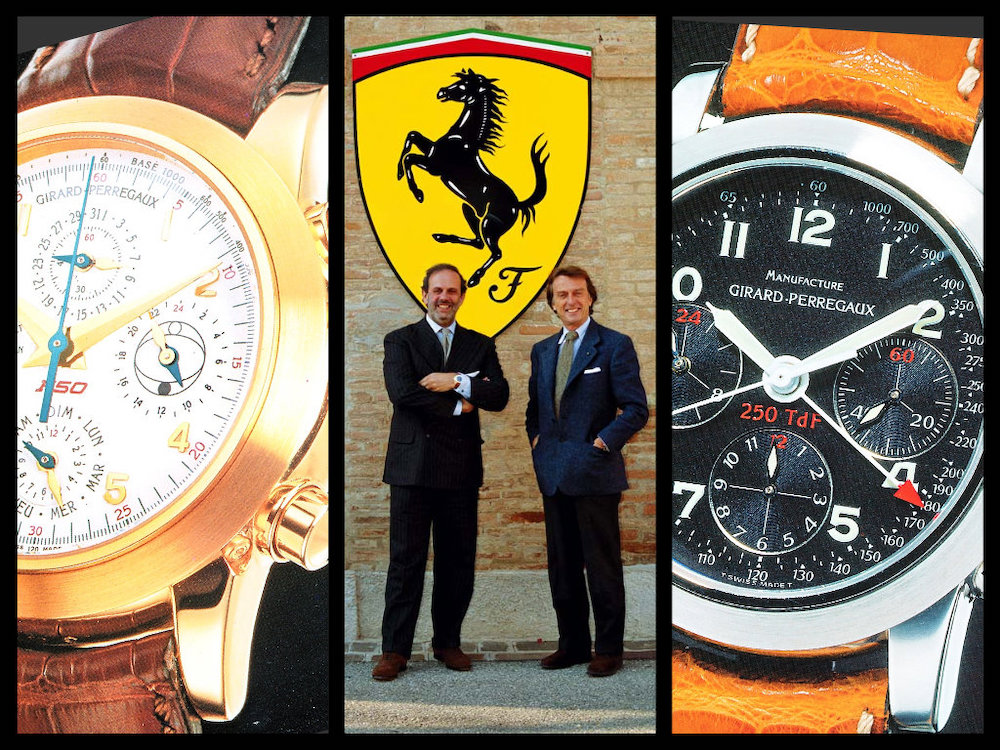 Luxury watches and luxury cars have a strong connection. Both are mechanical wonders and objects of design and desire. Many car enthusiasts also love watches and vice versa.

So it is no surprise that today you can see many cross-branding examples. It is however not a well-known fact, that the connection between Girard-Perregaux and Ferrari builds on a deeper more profound relationship and a unique approach of bringing the brands together in the Pour Ferrari collection.

Let’s have a closer look at how this all came about and what were the most remarkable creations during that partnership.

The partnership with Ferrari and the idea to create a branded watch collection roots back to Luigi (Gino) Macaluso and his personal background and passion.

When in 1992 Gino Macaluso bought the Maison Girard-Perregaux, he had already been part of the advisory board and an Italian retailer for Girard-Perregaux. In addition, he was an architect and art and design connoisseur and as such already had experience in designing watches. However, one of his most-lived passions was race-driving, in particular he competed in Rallye driving and was a one-time European Champion.

The cooperation started back in 1993 with a first meeting between Gino Macaluso and Luca di Montezemolo arranged through a close common friend. However, both “petrol heads” had loosely known each other since youth spending their time on race tracks. As such the relationship was off to a good start and a new friendship developed.

Luca di Montezemolo had already planted an idea in his head to bring a Ferrari watch collection to the market, but he needed a partner that could transport the spirit of Ferrari being “art on wheels” with uncompromising aesthetics and technology.

During conception phase a very important decision was made. Gino Macaluso had convinced Luca di Montezemolo not to bring out a “Ferrari-Watch” but instead go a path that will benefit both Maisons, by creating the “Girard-Perregaux pour Ferrari” line, a very important distinction as potential buyers would be assured to purchase a watch from as highly respected manufacture with all the quality control and service capabilities while the Ferrari brand was prominent in the design of the “Pour Ferrari” collection.

After initial design plans, Gino Macaluso presented Luca di Montezemolo an at that time very rare Rattrapante Chronograph in a gold case. This prototype immediately found the support from the Ferrari boss and with that the “pour Ferrari” collection was launched with a limited edition of 499 watches, Ref 9015, an automatic three register Chronograph with Rattrapante in 1995.

For the launch, Ferraristi from all over came to La Chaux-de-Fonds in a legendary convoy of Ferraris.

The Girard-Perregaux pour Ferrari collection had an immediate recognition and success and it was an easy decision to launch a standard collection of “pour Ferrari” watches, mostly initially the 8020 Chronograph and the 8025 and 8030 non-Chrono models. The standard collection was available in a wide array of case metals and dial colours, among them Ferrari-Red and Ferrari-Yellow.

Here is a shot of my GP Pour Ferrari 8020 Chronograph with red dial. I always feel like a race-driver when I wear that one. Still need to get the matching Ferrari but then you have to start somewhere.

Another important decision for the Pour Ferrari collection was the release of special, often highly complicated editions, mostly dedicated to legendary Ferrari models. Those typically came as limited editions to the market over the years.

These Limited Edition Pour Ferrari watches have created some of the most beautiful and desirable sports watches just as their dedication Ferraris have been and still are.

The first of these series was the Pour Ferrari F50. The F50 was the super car of the mid 90s, just as its predecessor the F40 was 8 years before.

The Girard-Perregaux Pour Ferrari F50 did not stand back behind its name patron. A Perpetual Calendar Chronograph with automatic movement available in all precious metals and in Titanium. The highlight was the stunning winder box, which was a Ferrari-Red stand with an acrylic display box. An art sculpture on its own.

It is difficult to mention all of those special models as there have been quite a large number over the 10 years of cooperation, so I will limit it to some exceptional pieces, but I must show you at least some of them!

Let’s start with Reference 9020 from 1999, dedicated to the Scuderia Ferrari, the F1 team. As such it had only a “S.F.” on the dial, which could also be read as “seconde foudroyante” as Ref 9020 was again a Chronograph with Rattrapante but with an additional Foudroyante complication. A small seconds hand that could stop time with 1/8 sec precision.

Ref 9020 is still today considered one of the best ever Chronograph designs from Girard-Perregaux. Here is a rather rate Titanium / while dial version with Kevlar strap.

But not only the F1 team but also some of the most iconic classic Ferraris had their special dedicated Pour Ferrari models.

The Legend: the Ferrari 250 GTO

An amazing design both watch and car.

Equally amazing is the Ferrari 275 GTB, a more civilised version of the GTO and with another dedicated (more civilised) Girard-Perregaux Richeville Chronograph in steel.

Or take a look at the 375 Mille Miglia Ingrid Bergmann. Those curves have never looked better on any other car.

What did GP create? A complete new model, case and movement of the utmost elegance:

Ref 8050 a manual wind mono-pusher Chronograph in either white or pink gold.

The 8050 also came in a special dedication box, not like the normal red Ferrari box, but in the Ingrid Bergmann silver colour.

Some other remarkable releases included some dedication watches to F1 Championships and F1 cars, like the 310B or the Ref 2599 for 4 consecutive F1 constructor championship wins.

However, in 2005 the cooperation came to an end. More and more commercial interests impacted the relationship and the collection and it was time to end the cooperation. Today, Ferrari partners with Hublot.

However, before the cooperation came to an end, it peaked with an absolute highlight from both sides. The next Hyper Car from Ferrari, the Enzo was created and GP matched that with the most complicated Pour Ferrari watch ever released.

A Limited Edition “Tribute to Enzo” not only celebrating the Ferrari Enzo Hypercar but also the great Enzo Ferrari himself.

For me the Pour Ferrari collection not only has been a cornerstone and great success for Girard-Perregaux, it also created some of the most interesting and complicated sports watches. The Ferrari brand together with the Girard-Perregaux brand was a match made in heaven, made possible by two passionate individuals and their great vision and dedication to create the best of the best.