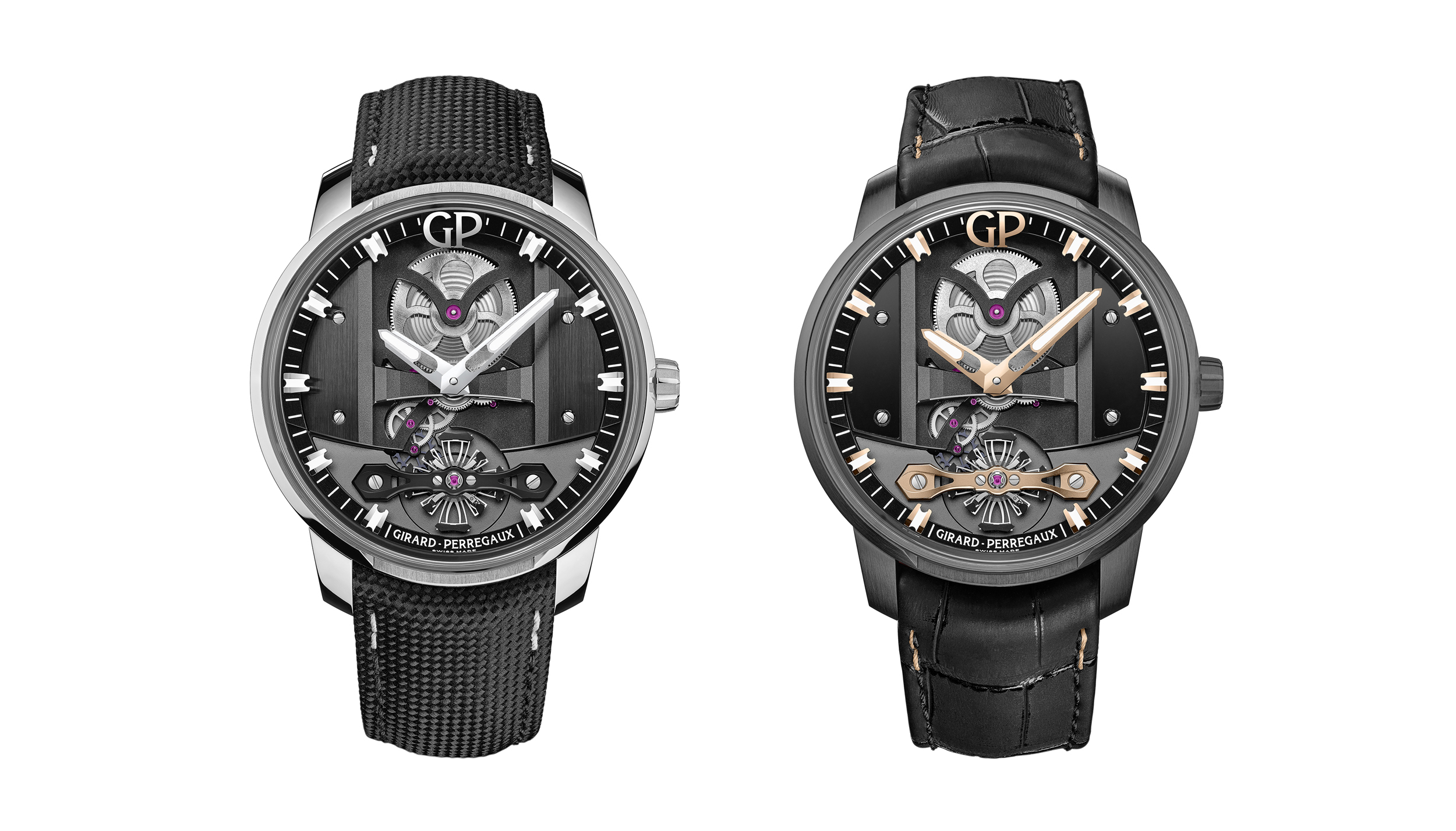 As promised, some further thoughts from my side on the recent release of novelties from Girard-Perregaux during the Geneva Watch Days. I actually do not consider the special Infinity Releases of Laureato, Vintage 1945 or 1966 as true novelties. So what is left? The “Free Bridge” is an overall new Reference and a new watch although it comes with some known elements. So let me share my impressions of this new release.

First of all, I would like to mention that I have not seen the watch “in the metal” so I can only form my opinion until now from photos and videos I have seen. Needless to say that all photos here are either official press release photos or have been published by others.

I will not make any difference between the regular Free Bridge and the Free Bridge Infinity Edition which essentially is the same watch with a more pronounced make-up (a bit of gold and a bit of onyx). GP Marketing stresses the point that the Free Bridge is a bridge between heritage and modern watch design with the intention to give an outlook what the brand will develop into in the future.

Experimenting with new material and technologies is nothing new to GP. The silicon blade of the Constant Escapement (CE) or the bold bridge design you can find in the Neo-Tourbillon give evidence to that. In general, I do applaud that kind of innovation and development. However, the CE or Neo-Tourbillon have been niche products even within the already niche that GP is in overall. The main stable have been in recent years the Laureato, the 1966 and the Vintage 1945 collection (and of course the Cat’s Eye for the Ladies). That we have not seen any truly new releases within those collections however makes me worried and puts the release of the Free Bridge into a different light.

Perhaps, the Free Bridge design is not meant to be a niche within GP but is showing the overall direction GP wants to take? Where does that leave the classic collection?

When I saw the first snippets of the Free Bridge, I immediately associated it with the Neo-Bridge watch. The Neo-Bridge seems overall very similar in looks but is probably much more refined with its exclusively designed skeleton caliber with micro-rotor. I personally never got warm with the Neo-Bridges even it is a fascinating watch. I tend to prefer a watch with a solid dial and a more classic look over the skull-like appearance of the Neo-Bridges. If I would own a Neo-Bridges, I would always think “damn, I should have gotten a Neo-Tourbillon”.

The Free Bridge model takes a much easier route using the standard GP 01800 caliber, only exposing the balance wheel and a skeletonised main spring barrel. The vertical focus of the design makes it less interesting to look at with a lot of (black) empty space around the centre of the “dial”. While there is a lot of depth which is easily achieved with a skeleton design, it hasn’t got the same finesse as for example the Laureato Skeleton, which reveals much more of the inner workings of the GP Caliber GP01800.

I have voiced my opinion before that GP really needs to develop a new modern in-house caliber to stay on top of the game. Caliber GP01800 is not my favourite caliber. It still is a Jean Richard development from 2003 (JR1000). Adding a variable inertia balance wheel is a nice step forward but doesn’t cut it in my view.

Talking about the Balance Wheel. Variable Inertia is not new to GP either (of course) and the previously used Microvar Balance Wheel has been a great design, even more advanced and better than the Patek Gyromax in my point of view. In the Free Bridge, a Silicon based variable inertia balance wheel comes into use. While it may have some technical advantages, aesthetically, I very much prefer Gold as material. I may be more convinced when I can see the watch in the metal, but for now, it does not add value to me to make that change from Gold to Silicon. In fact, it looks quite odd.

Overall, the Free Bridge is very large with 44mm diameter (did we not just see a trend to smaller watches recently, is now everyone even Rolex going back to growth?). A number of design elements like the hands and the oversized “GP” logo can be called bold if you mean it well or less so some may say overdone. My initial impression that we are looking at some cross design between Ulysse Nardin and Girard-Perregaux is still present and it is not something I want to see as the future design theme of GP. It is hard to judge how well the Free Bridge will be received by the market, some initial reactions seem positive, but I had seen similar feedback on the Laureato Absolute and frankly, I don’t think they have made a lasting impression in Sales.

GP is coming to a junction and needs to decide which path to go. Getting closer in designs to UN or focussing more on classic watch designs such as the 1966 or Vintage 1945. If I were in charge, I’d know which direction I would take the manufacture. Financial success has to be the ultimate goal if GP wants to be present in the future. I still think the novelties are a missed opportunity especially given that other brands seem to not have any good ideas other than colouring their dials in candy colours. The Free Bridge will be more like an Indie watch, so niche-niche and I’m not sure that will bring in the needed revenue to maintain GP as a full-fledged manufacture.