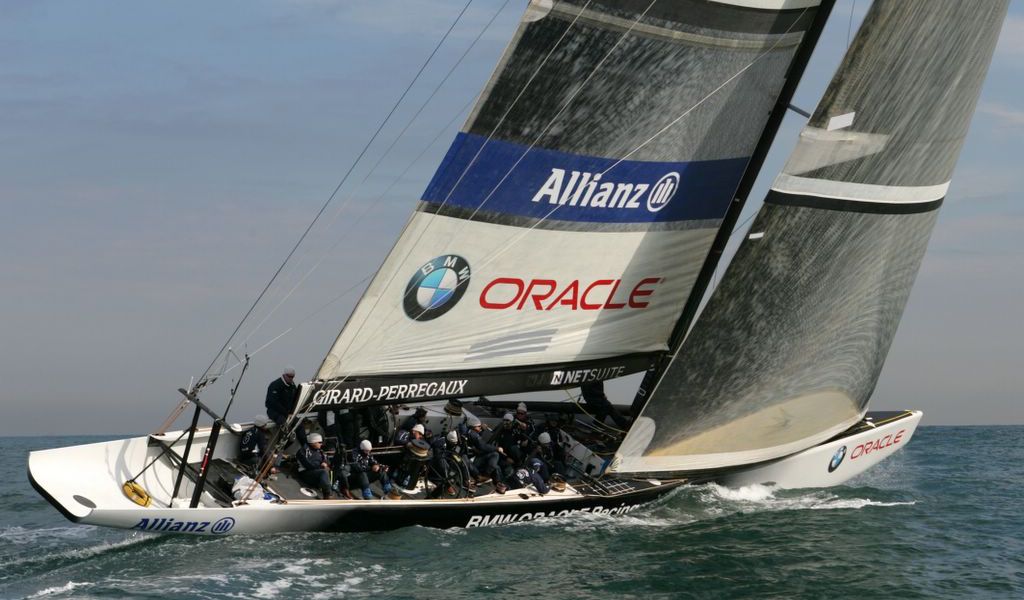 Certainly less well-know than the cooperation with Ferrari but nonetheless an important partnership of Girard-Perregaux from the 2000s is GPs support of the 32nd America’s Cup Team of BMW/Oracle. Fast cars and fast boats get along well and the America’s Cup has always been the Formula 1 or the Champions League of sailing, so teaming up with Girard-Perregaux makes a lot of sense.

Held in 2007, the 32nd America’s Cup was a race of giants. The top contenders were Emirates Team New Zealand, the BMW Oracle boats from Oracle founder Larry Ellison and the Swiss Alinghi boat, backed by Swiss entrepreneur Bertarelli. Alinghi was the defending champion and had taken in 2003 for the first time ever the oldest sports trophy to Europe. As the defending champion, Alinghi chose to run the 32. America’s Cup out of Valencia in the Mediterranean Sea.

Girard-Perregaux teamed up with the US team of BMW/Oracle in 2003 and became one of the sponsors to support this adventure. The BMW/Oracle team’s home base was the Golden Gate Yacht Club (GGYC) in San Francisco and we will see that the number 32 and the GGYC play a role in some of the significant watches developed by Girard-Perregaux under the BMW/Oracle sail.

While in the end Alinghi won the Finals against Emirates New Zealand, the support of the America’s Cup has left us with quite a number of interesting and technologically outstanding watches from Girard-Perregaux, worth taking a closer look at.

Along with the Sea Hawks, the Laureato Chronographs USA 98 are among the most produced and most commonly available watches from that cooperation. The Laureato 80175 is a very close cousin of the Evo3 Chronograph only dropping the date display, using rectangular pushers and displaying the typical Yachttimer scale. It was however a normal Chronograph mechanism and not a true Yachttimer. A true Yacthtimer, starts with a count-down function 10min before it starts counting forward. The USA 98 pays tribute to the 1997 boat named USA 98. There have been a few other Laureato’s namely the Team Watches with black rubber bezel and as well as Ladies versions.

But Girard-Perregaux did not stop there. One of the rarest watches ever produced by Girard-Perregaux is the Laureato 99075 from the year 2007, named the Golden Gate Yacht Club Challenger of Records. A true challenger this watch is. Not only was it a Limited Edition to 32 pieces (that’s actually something easy to do), it had a unique movement developed just for this limited edition! A manual wind true Yachttimer with Flying Tourbillon.

10min before the start of the race (first gunshot), you can start the Mono-Pusher Chronograph and a separate count-down hand counts down 10min to zero, when the race is officially starting and then a standard Chronograph counter takes over. Combined with a Flying Tourbillon in an 18kt white gold 46mm case, this is a watch you do not see every day or if you ever seen one at all. The movement is visible through a display case back and honestly, if this was my watch, I think I would look most of the time at the back.

With a sailing theme there must be of course a Diver watch and the Sea Hawk II is the perfect candidate. Here we have a Sea Hawk 49920 (smaller 40 mm version) and a Sea Hawk 49950 (44mm with 1000m WR) both are standard production models but with a dedicated dial design.

The 49920 has simply a BMW and an Oracle logo and a different luminova design while the 49950 has a carbon dial and a dedication to the GGYC. You can see the design theme being applied consistently to both models.

However, GP took the challenge to create another stunning and special Sea Hawk. The Sea Hawk II Pro 3000m WR with Flying Tourbillon, Ref. 99945. Available in Titanium, Pink Gold and Platinum. I’m not sure if Yellow Gold and White Gold also existed, but never spotted one. Like the Yachttimer it is dubbed Golden Gate Yacht Club Challenger of Records.

Not sure I would opt for a Diving Watch in precious metal and having a Tourbillon seems also out of place, but consider this more of a show-case Sea Hawk that if needed can go very deep. It’s a massive watch and I’m sure in Platinum will need a Schwarzenegger wrist.

The R&D 01 collection is a bit of a forgotten child and frankly I do not have a R&D 01 in my collection and no intention in getting one. Being a bit of a mix of the Sea Hawk with a crown at position at 4:30 h and Chronograph pushers on the left. The Chronograph is essentially the same as in the Laureato Evo3 just turned 180 degrees. As such, here you have the date display at 6 and small seconds and 24 hour display swapped. The right crown only operates an inner rotating bezel.

The BMW Oracle version has been added the 2x 5min counter as typical for Yachttimers but without any special functionality. There was however one special BMW Oracle version, which also existed as a normal R&D 01, featuring a Perpetual Calendar Chronograph and again the Challenger of Records dedication.

Even the World-Wide Time Control WW.TC had the honour to come in a BMW/Oracle version. The Chronograph has a scale for blue 5 min and red 5 min on the 30 min sub counter and the Cities ring has been customised with GGYC for Pacific Time and Valencia for CET. There was only one version in steel with blue/white 24 hour ring and white subdials on an otherwise black dial. I quite like the colour combination I admit.

Finally, we will have a quick look at the Ladies small chronograph. Not sure what to say about this one, but probably not my first choice for a ladies watch. It does have a sporty look but it is neither really suitable for water sports nor does it have any special features other than a blue/red painted dial. The small chronograph on its own however, is a quite a marvel with its beautiful long curved lugs and the smallest column wheel chronograph, the same in-house caliber 3080 you can find in the Vintage 1945 Chronograph 2599.

The partnership with the America’s Cup and BMW/Oracle was restricted to sponsoring the 32, America’s Cup. Girard-Perregaux however produced dedicated watches for a few years and the very special limited editions, like the Laureato Yachttimer or the Sea Hawk with Flying Tourbillon truly stand out.

Girard-Perregaux continued a little bit working with BMW, but this partnership never really took off and can by no means compared to the successful cooperation with Ferrari and the “Pour Ferrari” collection.